Nichols Selected As Court Coach for USA Basketball U18

Southwest Tennessee Community College's men's basketball coach Jerry Nichols, the 2016 TCCAA Coach of the Year who led the Saluqis to the TCCAA and Region VII championships and the "Elite Eight" of the NJCAA National Tournament, has been selected as a court coach for the USA Basketball U18 Junior National Team. 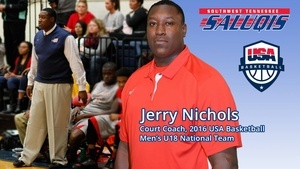 "I'm definitely honored and blessed that they chose me to be a part of USA Basketball," said Nichols. "It has been a fantastic year for this program at Southwest. In addition to the TCCAA and Region VII championships and an Elite Eight finish in the national tournament, five of seven sophomores signed with Division 1 universities and all seven sophomores graduated!"

The training camp will take place June 14-18 at the United States Olympic Training Center in Colorado Springs, Colorado, and will be used to determine the USA U18 Junior National Team's 12-member roster for the 2016 FIBA Americas U18 Championship July 19-23 in Valdivia, Chile. The tournament will feature eight national teams from North, South and Central America and the Caribbean. The top four finishing teams will qualify for the 2017 FIBA U19 World Championship.

In three seasons at Southwest, Nichols has compiled a 77-13 record and has a career head coaching record of 157-44 in seven seasons which include four at Motlow State. He has been voted the TCCAA Coach of the Year four times.