LaKyesha Stennis, this year's TCCAA women's basketball Player of the Year and a member of Southwest's 1,000-point club, has signed a national letter of intent with the University of Alabama to continue her education and basketball career. 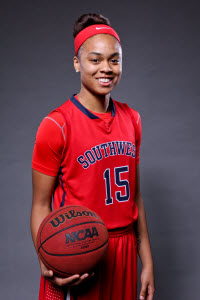 Stennis, a native of Lexington, Kentucky, was a third team All-American selection as a sophomore and was honorable mention as a freshman last season. Stennis, a two-time first team All-TCCAA honoree, scored 1,021 points in her career at Southwest which ranks her sixth in the program's history. As a sophomore, she led the conference and ranked in the top 10 nationally with an average of 20.3 points per game and also led the Lady Saluqis in free throw percentage (.759) and steals (2.1 per game).