Chef Phillip Ashley Rix, designer of the official chocolate of the 2016 GRAMMYs Celebration®, 2016 OSCARS SALUTE®, and the official gift of the 2014 FedEx Cup Playoffs Finals, is the 2016 commencement speaker for Southwest Tennessee Community College to be held May 7 at the Landers Center in Desoto, MS at 10:30 a.m. 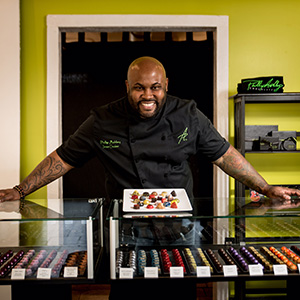 What Kate Spade did for handbags, Christian Louboutin for women's shoes and Versace for fashion, award-winning designer chocolatier and native Memphian Chef Phillip Ashley Rix is doing for chocolate; liberating it from the confines of tradition.

Named one of the Best Chocolatiers and Confectioners in America by TasteTV, listed in USA Today's 10 Best, donned the "Real Life Willy Wonka" by Forbes, listed in the Top Five Best Chocolate Boutiques in the South by Garden & Gun, "Memphis' King of Chocolate" by Local Palate magazine and a featured chef in the James Beard Foundation Celebrity Chef Tour in 2015, Chef Phillip Ashley is a rising star in the culinary world. He has a client list that reads more like TIME's 100 Most Influential People, with names such as Fred Smith, Tom Brokaw, and Morgan Freeman.