Saluqis Win on the Road in Third Overtime

The Southwest Men’s Basketball Team started the 2017-18 season with a bang in Pensacola, Florida defeating the Pensacola State Pirates by overcoming a second half deficit to defeat the Pensacola State Pirates in a 84-83, TCAA vs Panhandle conference showdown on Thursday afternoon. This win not only secured a season opening win, but also ensured that the Saluqi Men are ready for the high-intensity, dramatic games that are sure to come.

Tied 82-82, Saluqi freshman Carlos Marshall stepped up to the free throw line and coolly drained two shots to put the Saluqis up by a bucket in the third overtime period. The Saluqis prevented the Pirates from scoring on the final possession to seal the win and start the season with a victory on the road. I thought we competed hard and fought all night long, Coach Jerry Nichols said. Whenever you can open up the season with a win on the road, that’s big, especially when it’s an overtime game. 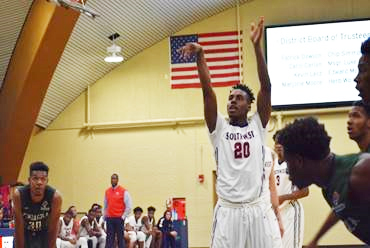