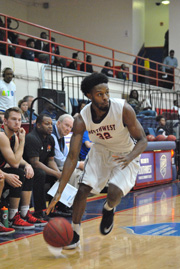 The Southwest men's basketball team improved its record to 6-3 overall and 3-1 in the TCCAA with wins over Walters State and Roane State over the weekend at the Verties Sails Gymnasium.

On Friday, the Saluqis shot 62.5 percent from the field including a blistering 69.6 percent in the first half in a 80-74 victory over Walters State. Freshman forward Cedric Henderson Jr. led the team with 21 points on 8 of 11 shooting, while sophomore guard J'Sebian Brown added 17 points and sophomore center Yuryk Lazard made all five of his shots to score 10 points.

On Saturday, Brown (18) and Henderson (17) combined for 35 points to lead the Saluqis past Roane State 79-76. Sophomore forward Anthony Yarbrough had 11 points and led the team with 8 rebounds and freshman guard Christian Jones was a spark off the bench with 10 points, 5 rebounds and 3 steals. 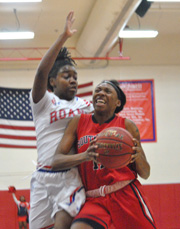 The Southwest women's team split their two games, losing to defending TCCAA champion Walters State 61-50 on Friday and defeating Roane State 64-60 on Saturday. The Lady Saluqis are now 6-2 overall and 3-1 in the TCCAA.

Sophomore forward Takya Bennett scored 20 points and Tia Bland had 16 points and 5 assists in the loss to Walters State. Bland led the Lady Saluqis with 20 points in the Roane State win while Bennett had 14 points and Tamia Curry had a near double-double with 17 points and a team-high 9 rebounds.

The Saluqis and Lady Saluqis will host conference rival Dyersburg State Saturday, December 8. Saluqis tip off at 2 p.m. followed by the women's game at 4 p.m.