Congratulations to Sherman Greer on his recent appointment to occupy the District 1 seat on the Memphis City Council.

Councilperson Patrice Robinson nominated Greer for the post Jan. 8 and the Council immediately voted and swore him into service.  Greer replaces Bill Morrison to represent the Cordova, Frayser and Raleigh communities. 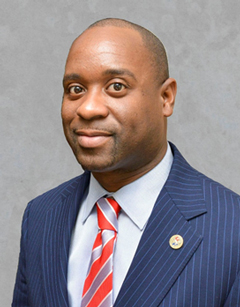 “I’m proud of Sherman on this honor and am truly elated that he will have the opportunity to serve District 1 and the Greater Memphis community in this capacity,” President Tracy D. Hall said.

Greer is writing his own political history through his long-standing involvement in fostering governmental relationships in Memphis and across West Tennessee. He joined Southwest in 2008 to facilitate relations with city, county, state and federal legislative bodies that foster opportunities for students and further the College’s mission.

As executive assistant to President Tracy D. Hall, Greer serves as the liaison for the Shelby County delegation and Tennessee Board of Regents (TBR) officials and frequently travels to Nashville to attend legislative sessions. He previously served as district director for United States Congressman Steve Cohen and was a senior aide to former Congressman Harold Ford Jr. for several years.

“It’s humbling to be granted the opportunity to serve the communities where I have lived for most of my life,” Greer said.  He plans to focus on public safety and economic development during his term that ends December 31, 2019.

“In Frayser, I want to champion legislation that fosters increased homeownership and it would be really nice if we could attract a few sit-down restaurants to help in that effort; in Raleigh, I want to see its retail footprint regain its footing, especially as it relates to the redevelopment of the site of the former Raleigh Springs Mall and that corridor; and in Cordova, my current neighborhood, I will take a close look at ways to better manage the traffic on Germantown Parkway and help the area plan for continued growth.”

Greer grew up in Hurt Village and Frayser and obtained his bachelor’s degree in political science and communications from the University of Tennessee at Martin. He also has completed all coursework for his master’s in strategic leadership at the University of Memphis.