February 23, 2020 | By By Phoenix Worthy, Director of Student Development 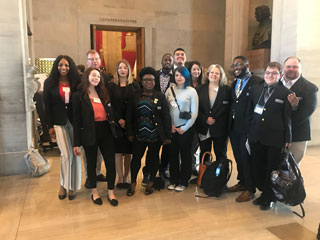 The Tennessee Intercollegiate State Legislature (TISL) is a four-day mock legislative session for college students across the state.  Each student serving in the mock legislature is required to write a piece of legislation that will be debated and voted on at the state capitol in Nashville, just like Tennessee’s real General Assembly. Southwest students chosen to participate see and learn how the state legislature works. They also develop leadership skills and network with other students from across the state who share their interest in government and the political process.

TISL advisors Dr. Eddie Baker and Ms. Tamera Boyland say TISL preparation is intense, requiring hard work and a commitment to learning about the legislative process, bills, and other elements essential to team success.  “TISL is a wonderful opportunity for students who are interested in government because it gives them the first-hand experience of the legislative process,” Dr. Baker said.

The 2019 TISL session was held Nov. 21-24.  Southwest sent a 12-student delegation that included two students serving in the Senate, seven in the House of Representatives, two as lobbyists and one as a media representative.

The Southwest delegation were:

Throughout the mock session, students were challenged to draft and present legislation, as well as serve in numerous other capacities.  The Southwest TISL Team drafted the following 11 bills, eight of which passed through the house and senate: 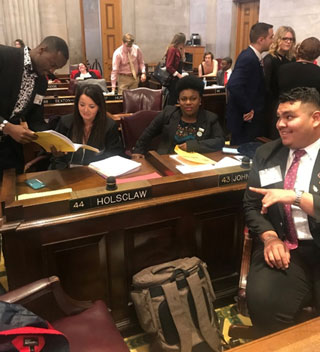 Carl Slappy, Jr. is working toward earning two associate degrees at Southwest in accounting and business administration. He says the experience was eye-opening. “Attending the mock session is not for the faint of heart—there is a lot of work and preparation involved, but it’s definitely worth going,” he said.  Slappy helped edit the bill calling for the independence of campus media. “It was fascinating and challenging to learn the proper procedures and framework of how bills are pushed through the house and senate.”

Students interested in participating in the 2020 TISL experience should contact the Office of Student Development at 901-333-5380 or studentdevelopment@southwest.tn.edu.