Imagination is a tragicomedy written by Associate Professor of Communications, Graphics and Fine Arts Levi Frazier Jr.  The play centers around two historical figures who meet one another in a passionate cat-and-mouse encounter– Phyllis Wheatley, America’s first published African-American female poet and intellectually gifted women of letters, and Alexander Pushkin, one of Russia’s greatest poets and a playboy. 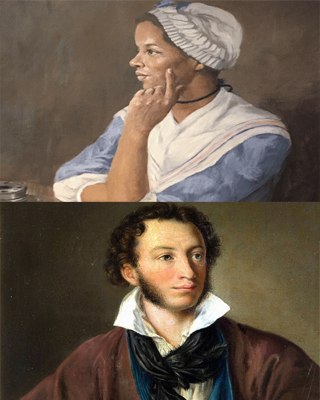 The two poets seem diametrically opposed to each other from the start. Born in West Africa in 1753, Wheatley was sold into slavery at the age of 7 or 8 and transported to North America. Pushkin was born into one of Russia’s most famous noble families in 1779. The two literary geniuses find themselves hurled through time and space and into each other’s lives for no apparent reason other than to grate on each other’s nerves.

Frazier said he got the idea to write the play after attending a poetry festival years ago at Jackson State University which featured notable black female poets. One of the poets featured was Wheatley, whose work Frazier was not intimately familiar. “Her work fascinated me and so I went home to do some research about her.”

Wheatley had written a poem called Imagination that was published in 1773. For several years, Frazier had wanted to write a screen play about Pushkin.  “Then I had an epiphany one morning to put the two together!”

In the two-act play, Frazier says fireworks explode as the pair struggle to gain dominance over each other with wit, intelligence and gender. The fictitious meeting features a heated battle of the sexes, and 18th Century poetry slam, and an intense literary rivalry that stops short of a physical altercation. “Unlike John-Paul Satre’s characters in No Exit who must live together for eternity, Pushkin and Wheatley discover that they only have one evening to figure it out,” Frazier said.

A reading of Imagination was performed at Rhodes College four years ago. This Southwest presentation will feature a cast of alumni and students.