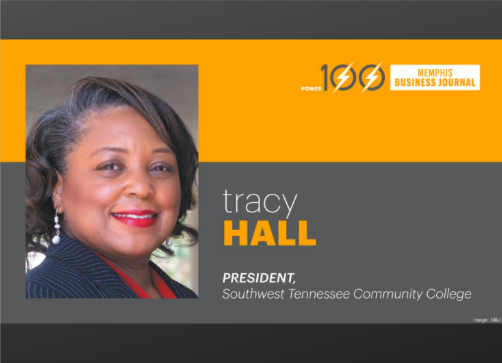 The Power 100 profiles Memphis’ most influential leaders who are change agents. MBJ’s editorial team meticulously vets the list each year to decide who are the 100 most powerful people in Memphis business and in the community.

According to MBJ, the term “power” can manifest itself in many ways, from someone at the top making decisions to a single act that has enormous consequences. Dr. Hall is powering the good as a change agent for the college. According to MBJ:

When Dr. Tracy Hall became president of Southwest Tennessee Community College (STCC) in 2015, she knew change was needed. Enrollment had declined for seven consecutive years, and a report showed that students found the registration process difficult. Under Hall’s leadership, STCC has joined Achieving the Dream, a national education reform network of colleges, and improved the enrollment process. It’s purchased 3,500 laptops to bridge the digital divide, started a faculty externship program, and launched a year-long calendar. Recently, STCC won a Bellwether Award, which was given to only 10 community colleges nationwide.